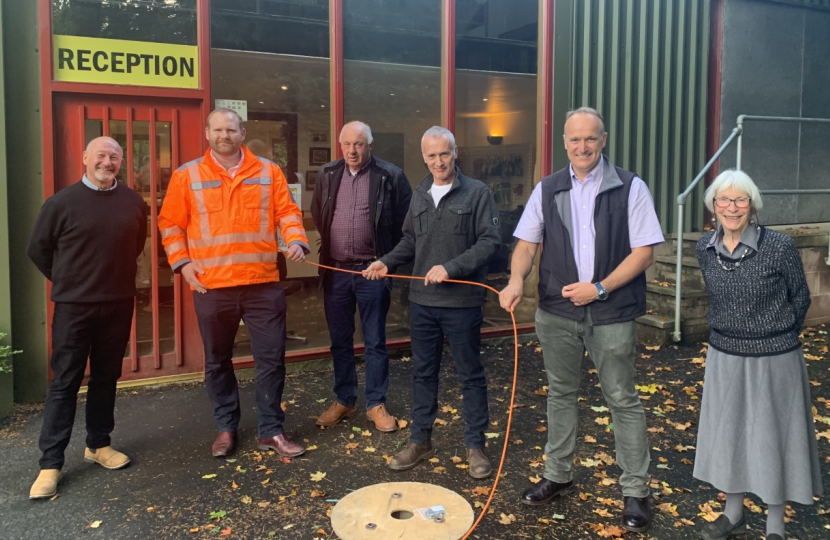 Dr Neil Hudson, MP for Penrith and The Border, visited Ravenstonedale to show his support for the Broadband for the Rural North (B4RN) project. Dr Hudson has worked closely with B4RN Chief Executive Michael Lee over recent months to get the best deal for constituents across Penrith and The Border. B4RN’s gigabit network is completely fibre optic, allowing rural households to experience higher speeds then they otherwise would on copper lines.

Last month, during a debate in Parliament, Neil pressed Digital Minister, Julia Lopez MP to work with Broadband for the Rural North (B4RN) and other providers to make sure that the Project Gigabit procurement process and changes to the voucher scheme do not prevent locally-led projects from progressing.

“It was fantastic to meet with Michael Lee once again to discuss the many broadband projects underway across Penrith and The Border. B4RN are an important player in the broadband market and do a great job in meeting local demand.

More broadly, I am determined that broadband stays high up on the political agenda. I therefore consistently meet with Ministers, industry leaders, local and parish councils and local residents to seek the best way forward for areas that are still suffering from sluggish broadband speeds and poor phone signal.

“It’s been absolutely fantastic to meet yet more incredibly enthusiastic B4RN volunteers down here at Ravenstonedale, and to be able to join Neil again on his visit to a site to see one of the many projects. Hopefully now, thanks to the changes at DCMS as a result of the influence and the pressure generated from the local MPs to see a project that hopefully as a result of those changes is going to be able to go ahead as a voucher priority area.”