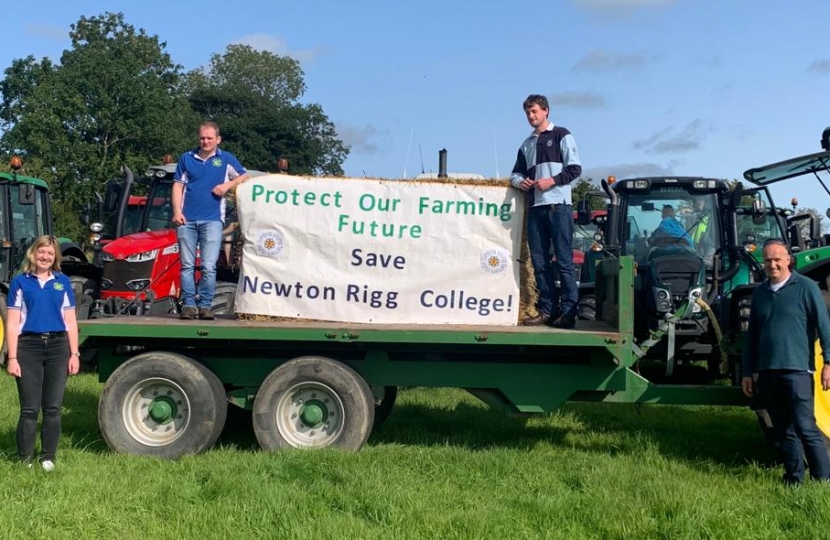 On Sunday 20th September, Young Farmers from throughout the county set off from Broughton in the South, Drigg in the West and Longtown in the North to make their strength of feelings known about the possible closure of the Newton Rigg campus.  The Tractor Run was meticulously planned and executed to operate within the Government’s Covid-19 social distancing guidelines.

Dr Neil Hudson is leading the campaign to save Newton Rigg and through his extensive lobbying of Government has been able to trigger a Further Education Commissioner-led Strategic Review of the College which, in turn, has led to a number of potential bidders coming forward wanting to take over the campus.

In a moving speech to the young farmers, Dr Hudson spoke about how the Young Farmers Tractor Run symbolised the importance of the Newton Rigg College, not only to Cumbria but the whole of the UK. He emphasised “we are in this together and we will find a way to save this precious institution.”

Jo Mills, Chief Executive of Cumbria Young Farmers said “Cumbria YFC were delighted that Dr Neil Hudson was able to welcome them at the finish line of their Tractor Run on Sunday. Much planning had gone into the event with upwards of 80 tractors participating. Taking to their tractors under the banner "Protect our Farming Future, Save Newton Rigg College", the young farmers are committed to showing their support for the college and the future of farming and agriculture within the county and to have their local MP there to support their cause was a real boost”

Following the event Neil said “It was humbling and heartening to join with Cumbria Young Farmers' Tractor Run in support of Newton Rigg. This is the next generation of farmers. They have shown loudly and clearly what this vital Cumbrian College means both to them and our UK farming future. We will keep working hard to try to save Newton Rigg and the Government-led Strategic Review that I have triggered and that is now evaluating management bids coming forward gives us the best chance of achieving that."

Our Further Financial Support for Jobs and Businesses

We are announcing a package specifically for those businesses which are not forced to close, but face reduced demand due to additional social distancing restrictions.