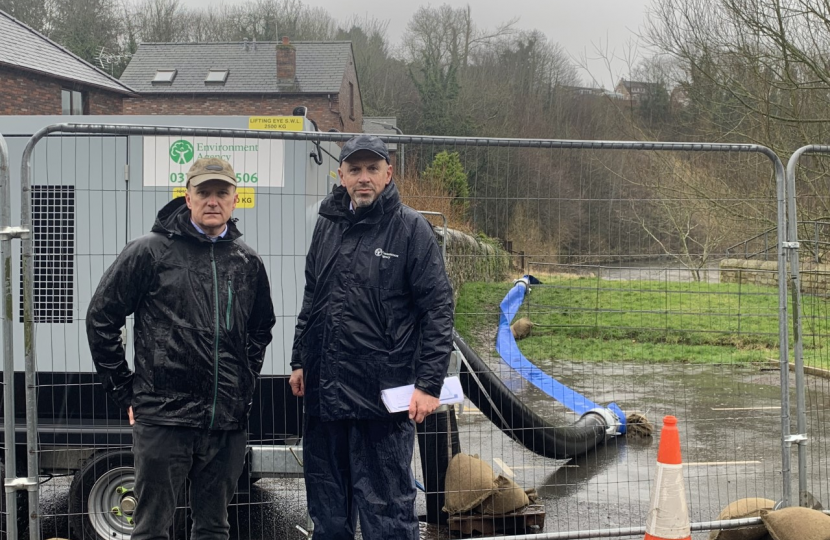 Communities suffering repeated flooding, such as those across Cumbria, are set to benefit from a new ring-fenced £100 million allowance to better protect properties.

The new Government announcement of the Frequently Flooded Allowance was welcomed by Dr Neil Hudson, MP for Penrith and The Border, which aims to improve funding access for smaller communities requiring complex flood schemes where larger schemes are not always viable.

Funding will be targeted at eligible communities where 10 or more properties have flooded twice or more in the last 10 years, helping to both accelerate existing projects and deliver new ones. It is anticipated around 80 schemes will receive support over the next four years.

This allowance will be part of the Government’s current programme of investment in flood and coastal defences. The Government announced in 2020 that the amount invested in flood and coastal erosion schemes would be doubled in England to £5.2 billion between 2021 and 2027, providing around 2,000 flood defences. This year, £700 million is being invested from that pot and will better protect 35,000 properties, bringing the cumulative total for the first two years of the six-year programme to more than 65,000.

“Sadly I’ve been to and supported communities in Penrith and The Border after bad weather and seen the dreadful impact of flooding. The impact goes far beyond the loss of possessions or damage to property – which themselves can be crippling - and in fact the mental health repercussions can l last long after the water has subsided, and the blue lights leave.

“That is why I’m pleased the Government is taking the issue seriously and prioritising smaller communities such as those in rural areas who can often struggle to find the help they desperately need.

“Last week, I stood up twice in the Chamber to discuss the extreme heat, which, like flooding, is symptom of the wider climate crisis. This is an issue that really impacts communities that are deeply dependent on the environment both economically but also as part of their identity.  I have triggered an Inquiry on Rural Mental Health by our EFRA Select Committee on which I sit; in this, we have investigated the impacts of shock events like floods on rural communities.”

“This funding is a step in the right direction, but I urge both the Government and society at large to move towards a sustainable future as fast as we can. For my part, I’ll keep pushing for better flood defences, more support against extreme weather events and increased rural mental health provision before and after these shock weather events.”

“Flooding is a miserable experience, especially for people who suffer its impacts time and again, and I feel we have a moral imperative to help.

“Our new Frequently Flooded Allowance will boost schemes in areas which are hit repeatedly and reduce the risk of flooding in the future.

“This new allowance will provide extra support for these areas and forms part of our major £5.2 billion effort to build around 2,000 flood schemes by 2027 and level-up defences across the country.”

Communities will be selected through the Environment Agency’s annual refresh of the £5.2 billion capital programme – which sets out the latest information on each project in the programme and the amount of grant-in-aid allocated to that project in that year.

The latest investment builds on the Environment Agency’s successful delivery of the government’s previous £2.6 billion investment between 2015 and 2021, better protecting more than 314,000 homes, exceeding its original target.

Thanks to a £2.6 billion investment, more than 850 new flood and coastal erosion defence projects were completed during this period. Over 580,000 acres of agricultural land, as well as thousands of businesses, communities, and major infrastructure – including more than 8,000 kilometres of roads – also benefited from improvement schemes.