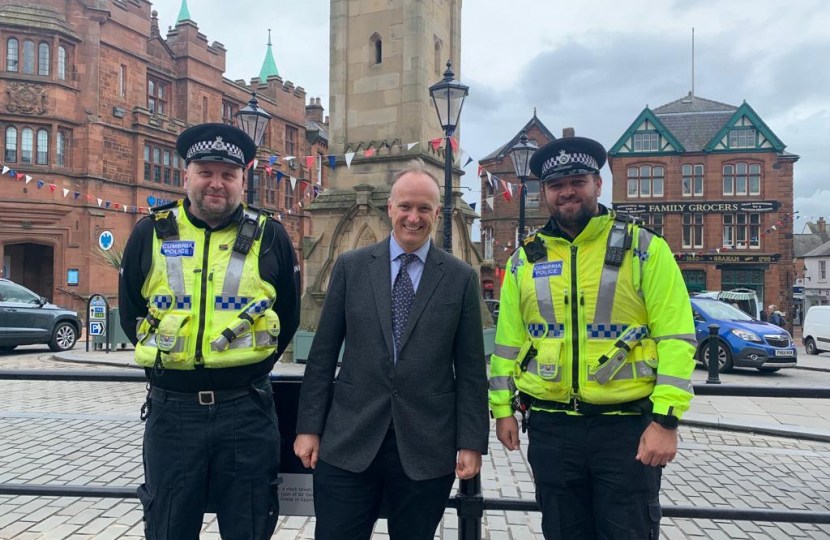 Dr Neil Hudson, MP for Penrith and The Border, has welcomed new figures that show 96 police officers have been recruited in Cumbria since 2019 as part of the Conservative Government’s pledge to put 20,000 more officers on the streets by March 2023.

Cumbria now has a total police headcount of 1,295 – with 18 sworn in to the force in front of a Magistrate just last week.

Since the recruitment drive was launched in 2019, the 43 police forces across England and Wales have seen an additional 13,790 police officers recruited, putting the Government on track to deliver on its manifesto promise.
The additional officers for Cumbria builds on the Conservative Government’s Beating Crime Plan and Police, Crime, Sentencing and Courts Act – aimed at reducing crime, protecting victims, and making the country safer.
This builds on the action already taken by the Conservative Government – including boosting police funding to a record £15.8 billion and investing £150 million through the Safer Streets Fund over the next three years into community projects to prevent crime – with a focus on neighbourhood crime, anti-social behaviour, and violence against women and girls.

“Having worked closely with Cumbria Police and Cumbria's Police and Crime Commissioner, Peter McCall, I know just how valuable boots on the ground are – particularly over such a large and rural area with lots to cover.

“I hope folk can now feel a little safer knowing 96 additional officers are there to protect them, pursue criminals and help neighbourhoods thrive.

“This year I’ve already stood up in the House of Commons twice to shine a light on the often-overlooked instances of rural crime and the mental health effects they can have on communities such as ours here in Penrith and The Border.

“Our police do a great job keeping our towns and villages safe, and now with my Conservative party’s manifesto pledge bolstering their numbers, even the hard-to-reach communities in rural Cumbria will be better protected from criminals.”

“We promised the British public 20,000 more police before March 2023 and that is what we are delivering. The total number of officers is now already at a 10 year high, with thousands more still on the way to protect the public from harm.

“That means more officers out patrolling our streets, bearing down on anti-social behaviour and violent crime, and helping to level up communities across the country.”