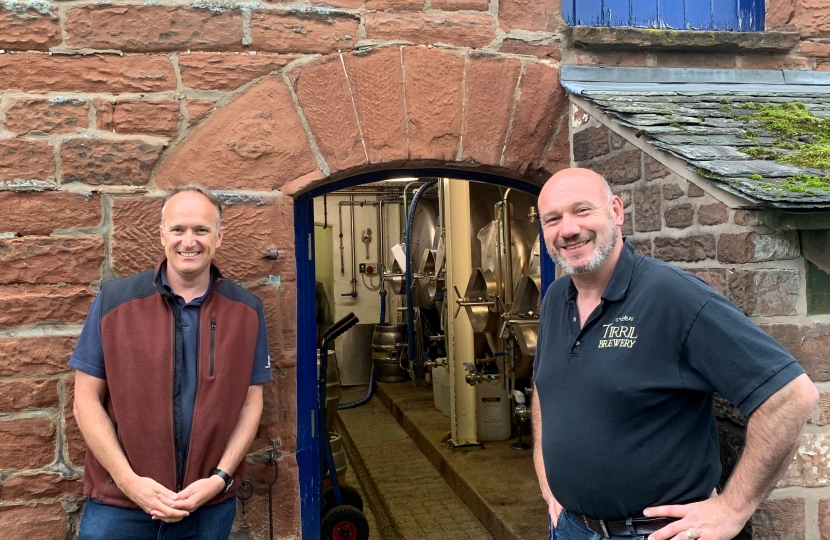 Dr Neil Hudson, MP for Penrith and The Border, has visited Tirril Brewery in Long Marton to discuss the impact of Covid-19 on operations, how the Government support schemes had helped the business, and their plans for the future.

Tirril Brewery was founded by Chris Tomlinson in 1999 and moved to its current location in 2007. Tirril Brewery creates an array of traditional craft beers as well as a range of spirits which are only sold in local shops, bars and restaurants.

Although the Coronavirus pandemic caused significant problems, as it has done with many other industries, Tirril Brewery  focused on preparing for the future and those visiting Cumbria for a staycation. During the visit, owner and head brewer, Chris Tomlinson showed Neil around the site and discussed some of the issues faced by the industry.

Chris from Tirril brewery stated after the visit " It was great to meet Neil at the brewery and show him the challenges we face with our new normal and for him to hear how the government support had helped us look after our staff and business this summer.

He took great interest in our concerns about future beer duty costs, but was also encouraged to hear of what a busy summer this has been for tourism in Cumbria.

I believe his obvious support for small breweries and hospitality in the county will certainly give our industry a voice in Westminster this winter when we need it most."

Neil Hudson MP said after the visit “It has been a fantastic opportunity to visit Tirril Brewery, one of a number of amazing breweries in the Penrith and The Border constituency. I was really heartened by the positive attitude of Chris and his team, not only to keep going throughout the challenges they have faced, but in making exciting plans for the business in the future.”

Chancellor of the Exchequer, Rishi Sunak on the Winter Economy Plan