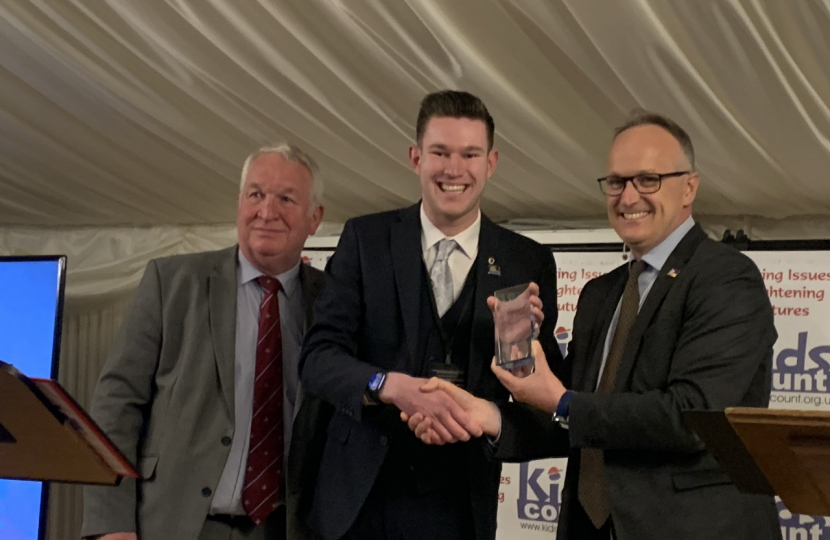 A Penrith man was presented with a national award for his inspirational fundraising at the prestigious Palace of Westminster.

Cameron Stewart, aged 22, was the joint winner of Members of Parliament, “Inspire the House”, Most Inspirational Young Person award, having been nominated by Penrith and The Border MP, Dr Neil Hudson.

In a fitting, gesture, Dr Hudson presented Cameron the award at a formal event at the House of Commons’ Terrace Pavilion on Monday 25th April. In his speech, Dr Hudson paid tribute to the community pioneer, calling Cameron an asset not just to Penrith, but to the whole country for his many efforts in helping local communities and key workers.

This was the 14th Inspiration Award, from Kids Count, a youth charity aimed at tackling the issues facing young people, while also confronting negative stereotyping of young people in the media and beyond.

The Most Inspirational Young Person award recognises a young person who has inspired others by their personal dedication, personality, enthusiasm, resilience, flair and commitment to one, or a number of, issues affecting young people.

“It was an incredible honour to win and quite emotional as well. I was quite surprised and thankful. It was just really nice to be nominated by Dr Hudson for all the kind reasons.

“The event was honestly incredible, getting to go down to the terrace at Parliament where so few people get to go. I enjoyed chatting to all the other winners and congratulating them.”

“I cannot congratulate Cameron enough. It’s a great win for such a tireless community champion and I cannot think of anyone who deserves it more. At a time of national crisis with the pandemic, Cameron is a shining example of someone who selflessly looks for ways to help and support people and our communities

“From setting up and distributing 3000 thank you cards to NHS staff in North Cumbria in the pandemic, to surprising residents of local care homes in Penrith with Christmas presents, to his non-stop 50 mile walk for suicide prevention charity PAPYRUS, he has proved time and again that he is willing to go above and beyond to help others in our community.

“I think I speak for everyone in Penrith and The Border when I say thank you to Cameron for all that he does. He is an inspiration to all of us.”