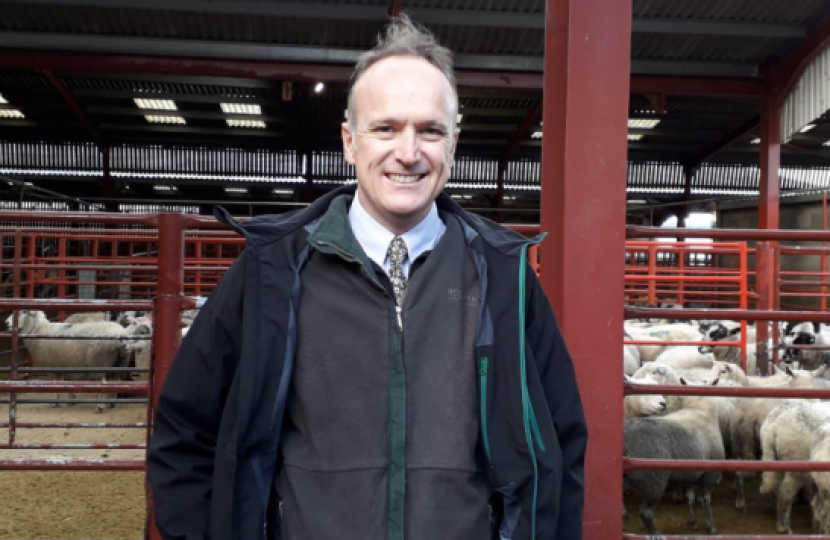 Dr Neil Hudson MP has welcomed the Government’s announcement that payments are being brought forward to help farmers with their cashflows.

The Government has today announced further steps to support farmers with cost pressures caused by demand and instability seen across the globe. This kind of support has been a priority for Dr Hudson has publicly been pushing for better measures to protect against increasing prices across the sector.

Under the latest plans, Direct Payments in England will be paid in two instalments each year for the remainder of the agricultural transition period, to help farmers with their cashflow.

Dr Neil Hudson, MP for Penrith and The Border, said:

“This is a huge win for farmers here in Cumbria and across England. Bringing forward half of this year’s BPS payment will provide farmers with a much-needed cash injection to help them continue to produce the high-quality food expected from British suppliers.

“Just last week I stood up I Parliament urging the Government to support farmers against spiralling costs, and I am pleased ministers have responded to me so quickly. This pro-active approach to the needs of the rural economy, is exactly the kind of thing I’ve been calling for in the Commons, in writing and in the cross-party EFRA Committee, on which I sit.

“The Government has shown it is listening to me, to my committee colleagues and most importantly to British farmers.”

The deadline for submitting Basic Payment Scheme 2022 applications is Monday 16 May 2022 and, under these plans, farmers with eligible applications will receive the first payment of 50% from the end of July and the second from December.

With agricultural commodities closely linked to global gas prices, farmers are facing rising costs for inputs including manufactured fertiliser, feed, fuel and energy. Due to heightened worldwide demand as the global economy reawakened following Covid, by February the price of gas had quadrupled on the previous year, and with the instability caused by Putin’s illegal war in Ukraine that price has risen further.

Output prices, particularly wheat, are also high and from analysis published by the Agriculture and Horticulture Development Board (AHDB) it is clear that farmers should continue to buy their inputs as usual. The steps government is taking to bring forward payments will allow them to do so.

“We have decided to bring forward half of this year’s BPS payment as an advance injection of cash to farm businesses from the end of this July. It will give farmers some additional cashflow earlier in order to provide some confidence. We will also make this a permanent change to the way we pay BPS in future with twice yearly instalments going forward.

“In the days of the EU this would never have been possible due to the way audits worked and the need to enforce the three crop rule during the summer.”

“Bringing forward half of this year’s BPS payment from the end of July will be a welcome boost to cash flow for many farm businesses during uncertain times.

“This is not just an opportunity to support farmers here and now through a cash injection. It’s a permanent change to bring Direct Payments in line with what will be a more regular payment system under the new environment land management schemes.”

This builds on a package of measures to support farmers announced in March, including: a delay to changes to the use of urea fertiliser by at least a year; revised and improved statutory guidance on the Farming Rules for Water; slurry investment grants to help meet those rules; and further details of the Sustainable Farming Incentive which will reward farmers for manufacturing more organic-based fertiliser products.

Dr Neil Hudson MP has written to national organisations in a cross-party effort towards fostering more realistic representations of body image in advertising and, importantly, on social media.